Two Communities - One Strategy - Many Testimonies
Same but Different!

Do you want to see testimonies like this in your family, church and community? 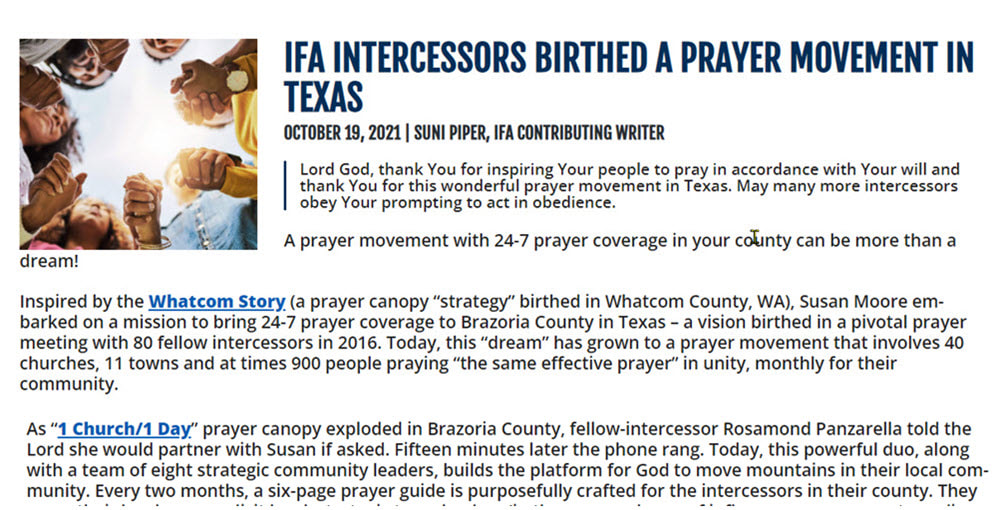 Leaders from over 38 nations and 10,000+ churches and ministries have reported using this strategy to unite the Church to pray and impact their community in all 7 spheres of society. They've also reported the launch of 31 prayer centers and many more church plants which was the product of the continual corporate prayer. From Lahore Pakistan to Gainseville FL, to Kissi Kenya, to Houston TX, to Billakurru India, to Wassilla AK, to Kalaymyo Myanmar church leaders have reported using this strategy to unite the Churhc to pray and transform their community through the gospel of the kingdom of our Lord Jesus Christ. This strategy is a FORCE MULTIPLIER!

To learn how you can be equipped to impact your community using this powerful strategy.  Click the button below.

The images below are from the original prayer request from her grandfather.  The image on the left is Mom's post 6 weeks later.  Click here for the full testimony.  It is a bonafide miracle glorifying Jesus.

This strategy is a modern application of an ancient design. It was first modeled by King David and then by every reformer in scripture. 1Church1Day was called Operation Rolling Thunder from 2004-2014. While the name has changed the underlying fundamentals remain the same.
​